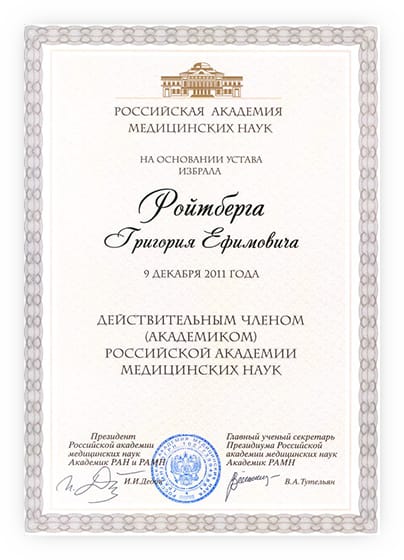 In 1991 she graduated from the medical faculty of the Moscow Medical Dental Institute. In 1998 she successfully defended her dissertation work for the degree of candidate of medical sciences, the title of associate professor was awarded in 2004. From December 1998 to the present, she has been working at JSC "Medicine" (the clinic of Academician Roytberg), at the same time she is engaged in pedagogical and scientific work at the department Faculty of Continuing Professional Education, Russian National Research Medical University named after N.I. Pirogov. She is a co-author of more than 40 scientific works, including a patent for an invention, a member of associations of general practitioners and a society of physicians, has repeatedly presented scientific reports at various scientific forums. Has a diploma from the Ministry of Health of the Russian Federation.

A professional in the field of healthcare management, a dentist-therapist of the highest category with unique experience in creating a quality management system and introducing Joint Commission International (JCI) international quality standards for medical care in the leading Russian clinic of Medicina JSC (Academician Roytberg's clinic). The general medical experience is more than 24 years, of which more than 19 years has been working in the clinic of JSC "Medicine" (the clinic of Academician Roytberg). In 1992 she graduated from the Moscow State Medical Dental Institute named after I.I. ON THE. Semashko. After training, she worked as a general practitioner dentist in the linear polyclinic of the River Shipping Company.

Medical service - 1 clinical department
In the clinic of JSC "Medicine" (the clinic of Academician Roytberg) has been working since 1997.

Kondratova Natalya Vladimirovna - a graduate of the Moscow State University. M.V. Lomonosov of the Faculty of Fundamental Medicine with a degree in General Medicine, which she graduated with honors. After graduation, she entered the clinical residency at the clinic of JSC "Medicine", which is the base of the Department of Therapy and Family Medicine of the FUV RSMU, and received the specialty "General practice (family medicine)". In 2008, Natalya Vladimirovna underwent professional retraining in the specialty "Organization of health care" and headed the hospital. The clinic of JSC "Medicine" is her first and only place of work.

In 2003, she defended her Ph.D. thesis, and in 2017 she received her doctorate in medical sciences. Natalya Vladimirovna combines medical and pedagogical work and teaches at the Department of Therapy and Family Medicine as a professor.

Author of over 100 publications in leading Russian and foreign journals, author of educational publications, co-author of two monographs. Has the highest qualification category.

Fluent in English, German and French.

Chief Physician of the Diagnostic Department, Candidate of Medical Sciences, member of the European Association of Nuclear Medicine. Doctor of ultrasound diagnostics of the highest category

Has published works in foreign and leading domestic publications. In 1989 she graduated from the Yakutsk State University with a degree in General Medicine (therapist). Has certificates in general ultrasound, Doppler ultrasonography of great and peripheral vessels, echocardiography, ultrasound studies in 3D-4D mode. After training, she worked as a doctor of ultrasound diagnostics at the National Center of Medicine under the President of the Republic of Sakha (Yakutia).

Total experience of more than 30 years, of which 18 years in JSC Medicine - since 2008 - in the position of chief physician of the Diagnostic Department. Participant of many international conferences. awarded: the badge "Excellence in Public Health", certificates of honor of the Moscow Department of Health, the Minister of Health of the Russian Federation

Education: Graduated from the Royal University of Management and Economics with a degree in Organization Management. She was trained in clinics in Europe and Israel.

Work experience: before joining the clinic "Medicine" E.V. Galanina worked as a lecturer at the RSC Energia Corporation training center for the document management course.