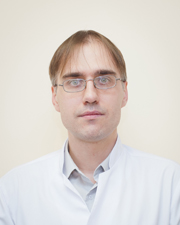 · An attack of palpitations, accompanied by a feeling of shortness of breath.

Compressing pains behind the sternum, in the left and right half of the chest, of a permanent nature, radiating to the neck.

In 2010, during examination in Munich (Germany), an aneurysm of the abdominal aorta was diagnosed, stenting was performed (two stents). During the preoperative examination, coronary angiography was performed - no hemodynamically significant lesions of the coronary arteries were revealed.

On 03.12.2017, he had an acute Q-forming myocardial infarction of the anterior wall of the left ventricle. He was treated at the place of residence in the Chechen Republic.

EchoCG - hypokinesis of the anterior septal region of the left ventricle;

ECG - sinus, cicatricial changes in the anterior wall of the left ventricle.

The course of myocardial infarction was complicated by early postinfarction angina from 08.12.2017.

Selective coronary angiography was not performed. 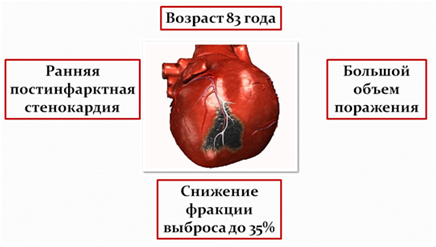      Echocardiography dated December 27, 2017 - areas of hypokinesis with elements of dyskinesis of the anterior, middle, apical segments, hyperkinesis of the lower parts of the left ventricle, a decrease in the ejection fraction to 35-37%.

    CT scan of the chest from 27.12.2017 - effusion in the right pleural cavity (about 160 ml), hypoventilation changes in the right lung. Pneumofibrous changes in the lungs on both sides. Lymphadenopathy of the intrathoracic lymph nodes. Pulmonary hypertension. Aortocoronarosclerosis.

CT signs of stenosis of the main trunk of the LCA by 38% in area, 10% in diameter, in the proximal segment of the LAD by 54% in area (27% in diameter), occlusion of the LAD in the distal segment.

Diuver 5 mg 1 tablet in the morning.

Allopurinol 300 mg in the morning.

Deterioration from 01/02/2018, when at about 5 a.m. he noted an attack of heartbeats, accompanied by a feeling of shortness of breath, constricting pains behind the sternum, in the left and right half of the chest, of a constant nature, radiating to the neck.

Hospitalized in the intensive care unit of the clinic of JSC "Medicine".

General condition: severe. The severity of the condition is due to a violation of the heart rhythm and pain syndrome. Body temperature 36.2 ° C. Height 168 cm, weight 102 kg. BMI 37.4.

Respiratory organs: breathing is free through the nose. Respiration rate 20 per minute. The rib cage is cylindrical in shape, evenly participates in the act of breathing. Painless on palpation. On auscultation: vesicular breathing, somewhat weakened in the lower parts of the lungs on both sides. No wheezing. SpO2 94% when breathing air.

Circulatory organs: there is no pathological pulsation in the region of the heart, vessels of the neck and epigastrium. On auscultation, heart sounds are muffled, rhythmic. Heart rate 138 per minute. According to the cardiac monitor, supraventricular tachycardia. The pulse is rhythmic, satisfying filling and tension. BP 110/70 mm RT. Art.

The abdomen is increased in volume due to the subcutaneous fatty tissue, is not swollen, and participates in the act of breathing evenly. On palpation, it is soft, painless. Auscultatory peristalsis is heard, weakened. There was no chair today.

Results of examinations at admission - ECG. 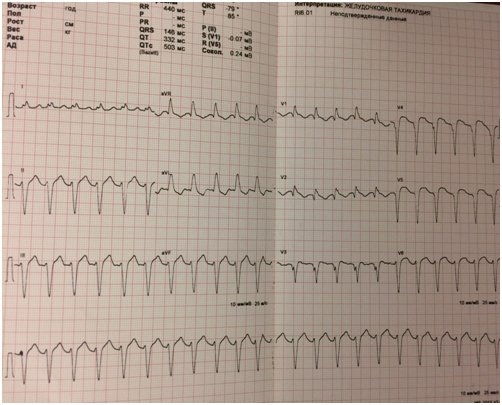      Echocardiography - hypokinesis with elements of dyskinesis of the anterior, middle, apical segments, hyperkinesis of the lower, ejection fraction at the level of 37-39%.

     Computed tomography of the chest organs - in comparison with CT from December 27, 2017 - positive dynamics of effusion in the right pleural cavity, hypoventilation changes in the right lung. There are now traces of effusion in the left pleural cavity. Without significant dynamics: pneumofibrotic changes in the lungs on both sides. Lymphadenopathy of the intrathoracic lymph nodes. Pulmonary hypertension. Aortocoronarosclerosis. 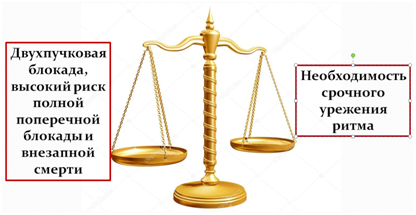 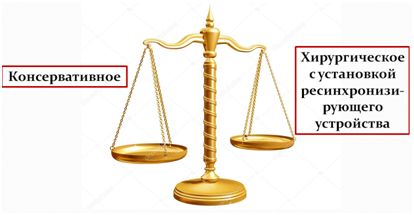 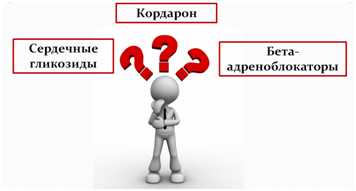 IV heparin 1 thousand units per hour under the control of APTT, followed by replacement with subcutaneous administration of clexane 0.4 ml per day.

Use of cardiac glycosides.

The planned therapy was continued:

Sugar-lowering therapy - IV insulin according to the level of glycemia.

On January 4, 2018, against the background of the infusion of cordarone and cardiac glycosides, a stable restoration of sinus rhythm was registered.

On January 4, 2018, the patient's sinus rhythm was restored against the background of complex therapy. The course of myocardial infarction was complicated by the formation of a two-bundle blockade (in dynamics, a pre-existing blockade of the anterior-superior branch of the left bundle branch and the first blockade of the right bundle branch were noted). When the sinus rhythm is restored, the PQ interval is at the upper limit of the norm, which suggests the presence of AV block of the 1st degree, probably against the background of the involvement of the upper parts of the conducting system in the zone of myocardial infarction.

Temporary electrocardiostimulation is absolutely shown to the patient (due to the risk of aggravation of conduction disturbances along the conductive system up to complete AV blockade). The issue of resynchronization therapy will be considered in 10 days, given the positive dynamics against the background of drug treatment.

The patient's condition is relatively satisfactory. No complaints. There is a stable restoration of the heart rhythm. No AV block, PQ 0.19. There are no signs of circulatory failure. In the lungs, wheezing is not heard. No cyanosis of the lips. Ejection fraction 38%. The ECG shows the dynamics characteristic of the underlying disease.

The question of the further management of the patient was raised for discussion of the council :

2. Conducting coronary angiography (including at the request of relatives).

3. Solving the issue of resynchronization therapy.

1. Deterioration of A-V conductivity (currently PQ interval 0.19 with a maximum allowable value of 0.21).

2. Nausea or lack of appetite and, on the other hand, worsening circulatory failure.

3. Echocardiography is advisable to do in 2-3 weeks to determine the ejection fraction in the first place and the formation of an aneurysm.

Given the good effect on the background of the therapy, the effectiveness of cardiac glycosides, the absence of an increase in AV blockade (PQ 0.20) and the rather high operational risks in the coming months, it is recommended to continue therapy, including cardiac glycosides, and add diuretics if necessary.

Taking into account the age, severity of the patient's condition and concomitant pathology, it was decided to postpone the installation of the resynchronization device until the effectiveness of the therapy is evaluated.

This tactic of patient management does not include extreme situations, including the appearance of syncope, AV block, and complex rhythm disturbances.

With the development of life-threatening situations, an emergency selective coronary angiography will be performed to resolve the issue of the type of revascularization of the coronary arteries, followed by the choice of surgical methods for treating cardiac arrhythmias (implantation of a resynchronizing device or performing radiofrequency ablation).

The dynamics of the condition during treatment.

· Regression of manifestations of circulatory failure.

· The patient became more active and was transferred to the department.

Echocardiography at discharge - the zones of left ventricular akinesis are preserved, there is an increase in ejection fraction up to 46-47%.

· During the study, episodes of deceleration of A-V conduction were recorded. Ischemic ST changes were not found.

Aneurysm of the abdominal aorta, condition after stenting from December 2010.

Valsartan (diovan) 80 mg ½ tablet in the morning according to the level of blood pressure.

Veroshpiron 50 mg before lunch under the control of the level of potassium in the blood plasma.

Diuver 5 mg 1 tablet in the morning.

The future fate of the patient.