Education of the right lung

Analysis of the clinical case presented

First meeting with a patient

The patient complained about:

The patient does not associate the onset of seizures with provoking factors.

Some data from the anamnesis

Smoked for 15 years: from several cigarettes to 1 pack per day; does not smoke since 2012

In the summer of 2017, he began to notice the onset of shortness of breath in the form of "compression" of the chest.

Since the summer of 2017, attacks of unproductive coughing began to occur, which passed within a minute.

Follow-up by a pulmonologist at the place of residence

Further course of the disease

In connection with the resumption of attacks of unproductive cough and the appearance of attacks of difficulty breathing at night, he again turned to the pulmonologist at the place of residence.

Spiriva was added to the therapy (1 capsule per day). No improvement in well-being was noted.

The patient was admitted to the City Clinical Hospital.

Change in condition and clinical picture

After discharge from the hospital, when coughing in sputum, he began to notice dark red streaks.

He began to notice periodic rises in body temperature up to 37.2 ° C.

CT scan of the chest organs was prescribed. 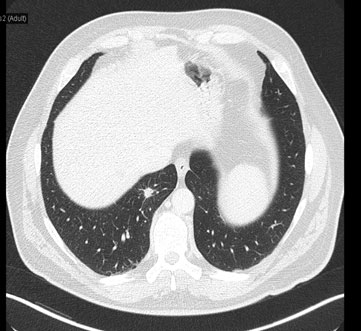      CT scan of the chest organs shows a 19 × 15 × 27 mm mass in the S7 of the right lung, several strands directed towards the costal pleura are determined.

     Consulted by a phthisiatrician - no data were obtained for the tuberculous process, a Mantoux test was carried out (reaction - 10 mm).

Thus, CT scan revealed a mass in the medial basal segment of the right lung in a 49-year-old patient.

Taking into account the clinical picture, it was suggested that there was an inflammatory destructive process in the lung (abscess).

A decision was made to conduct a trial 3-week course of anti-inflammatory therapy with broad-spectrum antibiotics, followed by CT control.

 Against the background of therapy, the condition returned to normal, there were no changes in laboratory parameters.

 A month later, a control CT scan of the chest organs was performed.

CT of the chest organs in dynamics 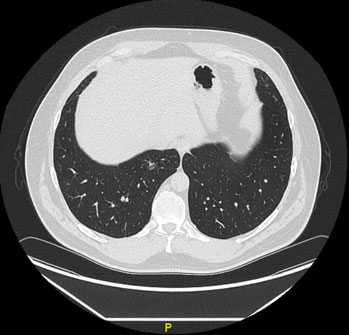 The detected formation in the S7 of the right lung is not currently visualized, there is a stellate area of fibrosis with a local compaction of 3 mm with a thickening of the interlobular and intralobular interstitium.

Outcome of the disease