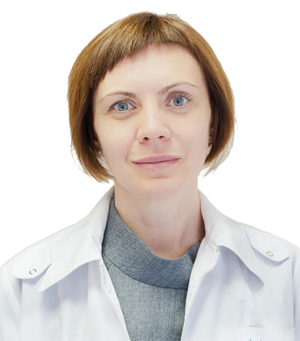 The patient came to the clinic on January 13, 2017 with an established diagnosis: clear cell endometrial cancer.

·         within 2 years periodically consulted a gynecologist at the place of residence with complaints of a single scanty vaginal discharge.

According to her, according to the ultrasound examination, the endometrium corresponded to the period of menopause and additional examination was not carried out.

Since November 2016, she has noted the appearance of moderate bleeding from the vagina, in connection with which hysteroscopy and separate scraping of the uterine cavity and cervical canal were performed in the clinic at the place of residence. According to the histological examination, the diagnosis was made: squamous cell carcinoma of the endometrium.

On examination, the diagnosis was confirmed. Histological response: clear cell adenocarcinoma (high grade) with full-thickness extension of endometrial fragments against the background of endometrial atrophy.

According to the ultrasound examination of the pelvic organs, the endometrium is 1.7 mm, linear, the basal layer is indistinct, signs of subserous uterine fibroids and evolutive changes in the pelvic organs.

According to PET / CT, there were no signs of a pathological metabolic active process, including in the uterus. Myomatous node in the body of the uterus.

After the oncological consultation, surgical treatment was performed in the volume - extirpation of the uterus with appendages with pelvic lymphadenectomy.

According to the final histological examination, the diagnosis: clear cell adenocarcinoma (high grade) (the tumor is limited to the endometrium).

Against the background of cystic atrophy of the endometrium without signs of invasive growth in the myometrium. Multiple leiomyoma of the uterus with dystrophic changes and calcification of the larger of the nodes. Isthmus, cervix without tumor growth. Sclerotic changes in the tubes. In the ovaries on the right, there is a simple serous cyst. Brenner's tumor in the left ovary. Lymph nodes without tumor growth. Immunohistochemical study: PR expression is absent in tumor cells.

The oncologist's observation is recommended 2 times a year.