On January 30, 2019, in the leading private clinic of JSC "Medicine" (the clinic of Academician Roytberg) for the journalists of Moscow and the Moscow region, a tour of the oncological center was held, timed to coincide with World Cancer Day.

“We invited journalists to tell about the new possibilities of medicine in the fight against cancer, that today some types of cancer are curable in 92% of cases, that life expectancy after diagnosis has increased significantly, that the quality of life after treatment does not decrease. We really want as many Russians as possible to know about this, so that people are not afraid to go to doctors and undergo examinations in a timely manner, - said in his welcoming speech the President of JSC Medicine, Academician of the Russian Academy of Sciences, Honored Doctor of the Russian Federation, Head of the Department of Therapy and Family Medicine of the Russian National Research Medical University named after ... Neither. Pirogov Grigory Roitberg. - The Government of the Russian Federation has adopted the National Cancer Program, calculated until 2030 and aimed at reducing mortality from cancer. We are ready to work together on its implementation. We have sufficient experience in the diagnosis and treatment of cancer. Since 2013, JSC "Medicine" has been operating an oncological center, which includes an outpatient department, chemotherapy and radiotherapy departments, and a center for radionuclide diagnostics. Citizens of the Russian Federation, within the framework of the Program of State Guarantees for the Provision of Free Medical Care to Patients with Oncological Diseases, can undergo a free PET / CT scan in our oncology center and receive free chemotherapy treatment. And residents of Moscow who have a compulsory medical insurance policy issued in Moscow can also undergo treatment with radiotherapy free of charge. " 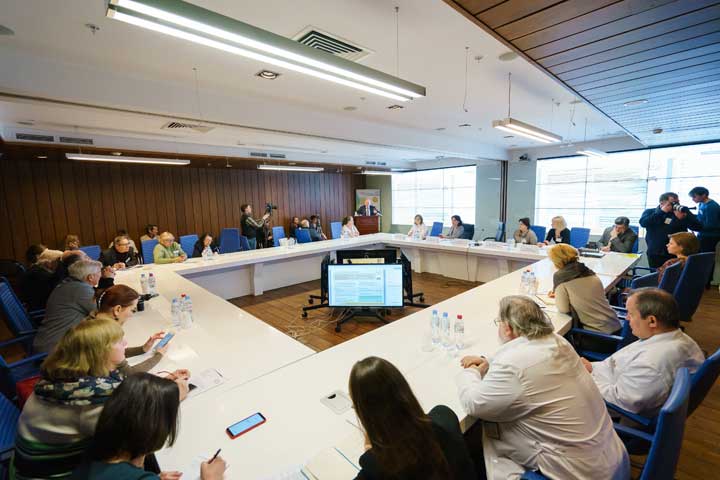 The leading specialists of JSC "Medicine" also spoke about modern methods of diagnostics and treatment of oncological diseases.

In conclusion, they conducted an excursion for the journalists and introduced them to the work of the departments of the oncological center of the clinic of Medicina JSC. 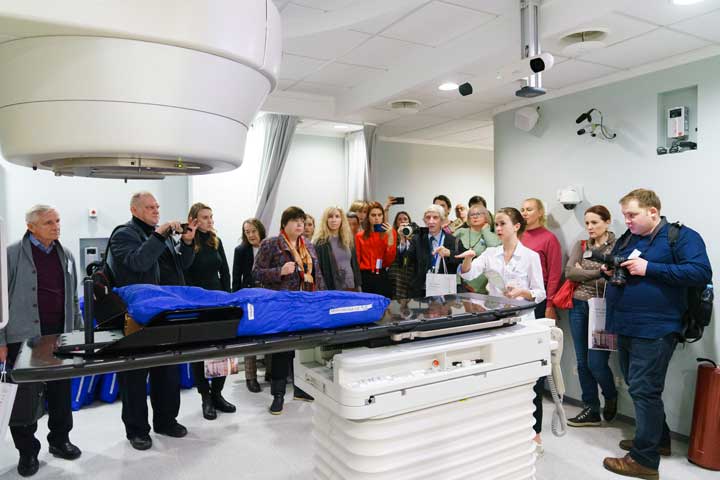 In Russia today there are about 2.5 million patients with cancer. The five-year survival rate after diagnosis in the Russian Federation is one of the lowest in Europe and is 40%. In France, for example, more than 60%, and in the USA more than 80%. The reason is that in Russia, oncological diseases are diagnosed, as a rule, at the 3rd and 4th stages, and in Europe and the USA at the 1st or 2nd stages.

According to various sources, in our country, the life expectancy of a cancer patient after diagnosis is 2.5 - 4 years, while in Europe, the United States - 15 years. JSC "Medicine" sets an ambitious task to return the patients to these 11-13 years.

All over the world, there is a steady growth trend in oncological diseases; in Russia, for example, this figure is increasing annually by 1.5%. On the one hand, this can be explained by more effective methods of early diagnosis, and on the other hand, by the aging of the population, environmental and economic reasons. Mortality from cancer today is in second place after cardiovascular diseases with a clear tendency to outstrip the latter. The problem of the growth of oncological diseases has become global. In 2000, the International Union Against Cancer (UICC) declared February 4 World Cancer Day. The purpose of the Day is to draw public attention to this global problem, to remind about how dangerous and widespread cancer diseases are now, and to significantly reduce cancer mortality.

JSC "Medicine" (Clinic of Academician Roitberg) was founded in 1990. This is a multidisciplinary medical center, consisting of two medical buildings with a total area of ​​35 thousand square meters 2 and including a polyclinic, a hospital, a 24-hour ambulance and the ultra-modern Sofia Oncology Center. More than 350 doctors of 66 medical specialties work here. This is the first clinic in Russia to be accredited according to the international JCI standards. JSC "Medicina" Clinic (Professor Roytberg Clinic) was recognized as the best private clinic in Moscow by the jury of the Moscow festival in the field of health care "Formula of Life-2012". The clinic is certified according to international standards ISO 9001: 2008, is a winner of the European competition for quality EFQM Awards 2012 and a laureate of the RF Government Prize in the field of quality. JSC "Medicine" is the clinical base of the Department of Therapy and Family Medicine of the Russian National Research Medical University named after N.I. Pirogov.