In recent years, paroscopic operations have been widely used in the surgical treatment of urological patients. In this regard, a new direction has appeared in urology, which is commonly called urological laparoscopic surgery. One of the main differences between laparoscopic and surgical techniques is the way in which the surgeon obtains anatomical information regarding the location of the surgical site. Laparoscopic surgery is an operation on the kidneys and ureters in the retroperitoneal space through the abdomen by punctures. The main feature of laparoscopic operations is that all interventions are performed almost without incisions - through small punctures on the skin (instruments 5 and 10 mm in diameter) under the control of a TV. The surgeon inserts instruments through the abdomen, opens the peritoneum, and then enters the retroperitoneal space, where the kidney, ureter and their vessels are located. The workspace is created by injecting carbon dioxide (harmless gas) into the abdomen.

The advantages of laparoscopic treatment of many urological diseases over the traditional open method are beyond doubt: 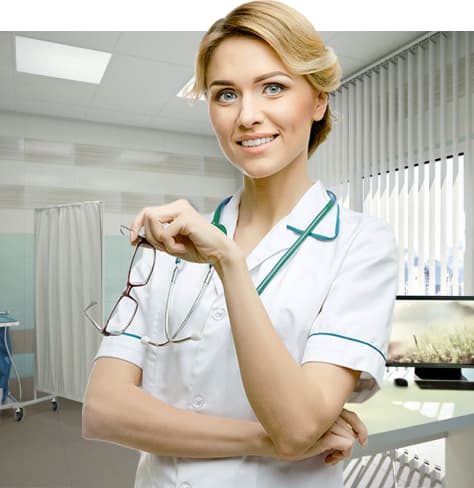 Call JSC «Medicine» (clinic of academician Roytberg), and our employees will answer all your questions

Prostate cancer is one of the most common diseases in the world. In the structure of oncological diseases in a number of countries, prostate cancer comes in 2-3 place after lung and stomach cancer, and in the USA - in first place.

Up to 400 thousand cases of prostate cancer are diagnosed in the world every year.

In Russia, the incidence of prostate cancer takes 7-8th place and was about 6.0 %. The number of newly diagnosed cases reached 12,600. A feature of prostate cancer in Russia and the CIS countries is late diagnosis, when the tumor is diagnosed at III-IV stages - stages when a cure is impossible and treatment is exclusively symptomatic. In connection with the above, timely diagnosis of early stages of prostate cancer is of great importance. A regular visit to a urologist with the performance of mandatory studies (determining the level of PSA - Prostate Specific Antigen, ultrasound, digital rectal examination) is necessary for all men over forty.

Today, there are many methods of treating prostate cancer such as hormonal therapy, radiation therapy, and surgery.

In the early stages of tumor development, i.e. stages at which it does not grow outside the prostate gland, no data on metastases have been obtained, surgical treatment is possible.

The main advantage of surgical methods - radical operations, is the possibility of a complete cure for prostate cancer, one hundred percent getting rid of cancer. The greatest survival rate of patients was noted precisely after surgical treatment.

The operation consists in the complete removal of the prostate gland, the surrounding lymph nodes and the imposition of an anastomosis between the bladder and the urethra.

Currently, endoscopic techniques, the so-called "operations without incisions", are increasingly beginning to be used in oncourology. Laparoscopic radical prostatectomy is an operation method that has firmly established itself throughout the world as effective, easily tolerated by patients and having the least number of postoperative complications. This operation is the most frequently performed for prostate cancer in most clinics in the world. The method consists in the fact that in order to access the prostate gland and the manipulation of it are not fulfilled traditional surgical incisions, and all manipulations are carried out through small punctures on the anterior abdominal wall, under the control of the video.

Working with small instruments at high magnification, which is provided by modern video technology, allows you to achieve the following advantages of this surgical intervention:

Laparoscopic clipping of the testicular vein for varicocele

Ivanisevich's operation is a widespread abdominal operation. A classic operation, which, unfortunately, can be complicated by recurrence (up to 25%) and dropsy of the testicle. Laparoscopic surgery uses a high-resolution digital camera to preserve the testicular artery and lymphatic vessels. It is even possible to identify the silent small veins, which are most often the cause of the recurrence of varicocele. The recovery period is much shorter in comparison with abdominal surgery. Patients are discharged the next day after surgery and can immediately resume their normal life.

Surgical intervention should be performed for renal cysts of type 1,2 according to Bosniak with pain, compression of the cavity system, and decreased kidney function. For cysts larger than 4 cm, laparoscopic excision is the optimal method. Surgical treatment is performed through 3 trocar approaches with dimensions of 5 mm. This is enough to completely remove the cyst, to obtain material for subsequent histological examination. The postoperative period is quite short, and after 2-3 days you will be able to start your usual activities.

It is performed with obstruction of the LMS from the inside (congenital, acquired) and obstruction from the outside (crossing the vessels). The rehabilitation period for such operations is much shorter than for abdominal operations.

It seems to be the most physiological and reliable way of fixing the kidney in the correct position with its increased mobility. In this case, the kidney is fixed to the psoas muscle using a strip of synthetic threads. After laparoscopic surgery, there is no need to stay in bed for a long time (with open surgery, this period can last up to 10 days) and after a few days the patient is discharged from the hospital.

If it is inexpedient to perform endourological intervention or shock wave lithotripsy, the stone can be removed by laparoscopic access. At the same time, all standards of low-traumatic treatment are observed, which can significantly reduce hospital stay and ensure a quick return to everyday life.

This operation was first performed in 1996. Since then, the technique of its implementation has been significantly improved and now laparoscopic nephrectomy can be called the standard of surgical intervention in conditions requiring the removal of the kidney. The postoperative period after this intervention proceeds very favorably, it allows to activate the patients the next day and does not require a hospital stay for more than a week.

As we studied the features of the development of neoplastic diseases of the kidneys, it was found that not every patient needs a complete removal of the organ. Quite often it is possible to save the kidney by removing only the part containing the tumor. With the development of technology, this operation has become possible to perform, including the laparoscopic method. The advantages of this type of intervention, first of all, is its low invasiveness, which is certainly better for the patient.